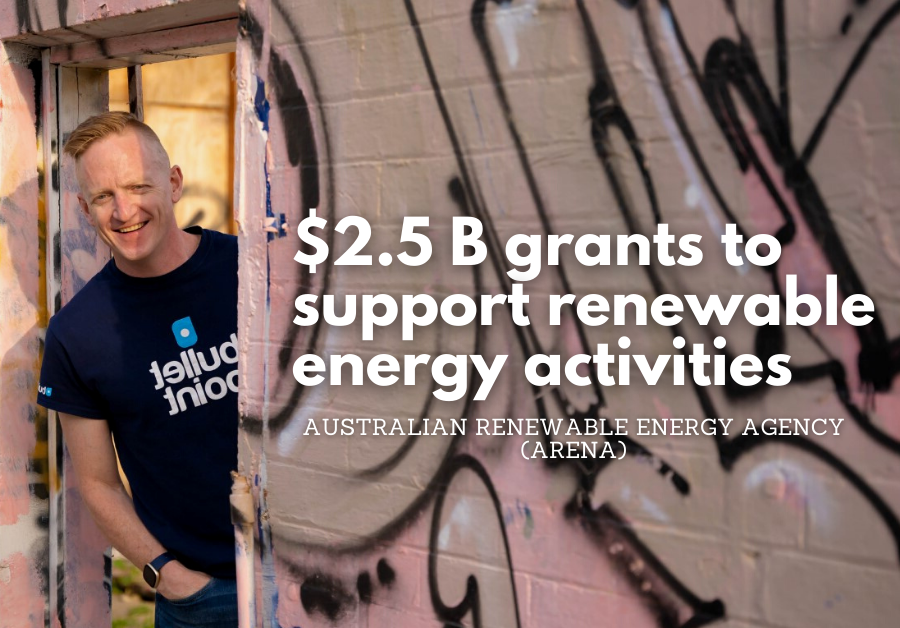 What is the Australian Renewable Energy Agency (ARENA)?

ARENA investments span the commercialisation pathway from research and development to demonstration and near-commercial deployment projects.

The Australian Renewable Energy Agency (ARENA) investments span the commercialisation pathway from research and development to demonstration and near-commercial deployment projects.  It takes a technology-neutral approach in considering project applications and has a mandate to capture and share knowledge from its projects.

Availability:  Applications are accepted only during competitive rounds.

Availability: The Fund targets technologies and businesses that have passed beyond the research and development stage and which can benefit from early stage seed or growth capital to help them progress to the next stage of their development.

Availability: The launch of Round 1A and Round 1B funding rounds, which was due to open on July 6, has been postponed pending the government issuing a new regulation that clarifies the technologies that ARENA is able to support in the Program. Program guidelines will be revised and reissued ahead of the opening date of the funding round.

ARENA provides funding assistance to renewable energy activities according to the General Funding Strategy and Investment Plan. It has approximately $2.5 billion in funding, which is legislated and extends until 2022.

Projects must address one or more of the following four key technology focus areas:

Technology developers, researchers and other organisations are invited to submit applications for funding under relevant ARENA programmes.

The Advancing Renewables Programme is open for new applications.

ARENA has conditionally approved up to $47 million in funding for Genex to construct a pumped hydro energy storage system at the former Kidston Gold Mine in north Queensland.

The facility will store energy from a 50 MW solar farm that is already operating on the site as well as a planned 150 MW wind farm that will begin construction in 2022.

Genex’s $777 million project will essentially turn the existing mine pits into a giant battery, pumping water into an upper storage reservoir when energy prices are low, then releasing it through reversible turbines into the lower reservoir to generate power when demand for electricity is high.

Rheem’s trial will explore a number of approaches to demonstrate active control over approximately 2,400 residential hot water systems within South Australia. Residential customers with and without solar panels will be able to participate. The project is being launched under Rheem Australia’s renewables brand, Solahart.

The Australian Renewable Energy Agency (ARENA) has announced $318,000 in funding to demonstrate a full-scale solar PV and ground-source heat pump system. The project will be for a commercial broiler facility in Yanderra, New South Wales. Annual energy bills for chicken farms amount to around $80 to $100 million across Australia.

The hybrid system will see the installation of a 100-200 kW thermal ground source heat pump system to replace LPG as a fuel for heating and cooling a single shed for housing chickens. The poultry broiler industry utilises sheds that require both heating when chicks are young, and cooling as the chicks grow up.

Ground Source Systems estimates that installing heat pumps powered by onsite solar PV has the potential to reduce total emissions by around 1 million tonnes per year and provide even better conditions for the chickens housed in the shed.

Local researchers have unlocked a way to produce low cost hydrogen from renewable electricity, which is now on the road to commercialisation.

Hydrogen technology developer Hysata says its breakthrough puts within reach the cost of producing hydrogen at a cost competitive with gas – $2 per kilogram. Hard-to-abate sectors including steel manufacturing, heavy transport and chemical production are predicted to be major customers.

Hydrogen is emerging as a key opportunity towards global net-zero targets because of its versatility. It can be used to produce electricity, displace natural gas and repower transport. However, low conversion efficiency and high costs have previously left this production method unable to compete with fossil fuel-derived alternative.

The Australian Energy Market Commission, the rule maker for Australia’s electricity market, has proposed changes they say will help to integrate more rooftop solar into the grid and address the emerging “traffic jam” caused by rooftop solar uptake in certain areas.

In March, the AEMC released its draft determination that would also change the way distribution networks can recover costs associated with hosting solar and offer new incentives for solar homes to shift their exports outside of peak times.

The proposal would allow networks to implement “two-way” pricing, offering payments to solar households for sending energy to the grid when it is needed, but also potentially charge to export at congested times.

The Australian Renewable Energy Agency (ARENA) has announced $341,990 in funding to startup Diffuse Energy, which will support installation of micro wind turbines at ten off-grid telecommunications towers to demonstrate the company’s technology.

Diffuse was founded by University of Newcastle engineering researchers in 2018. One of its potential markets is remote telecommunications centres. These are heavily reliant on diesel generation, which creates exposure to natural disasters and risks lost communications at times when they’re most needed.

Writing a good quality grant application is a critical element in the application process. An application needs to be well thought through, written concisely, have clear objectives and purpose, and show clear links to the objectives of the grant guidelines.

The grant application must answer all questions, provide all required information and respond to the merit criteria. It should also reflect your organisation’s business strategy.

Bulletpoint are expert grant consultants and can assist with all aspects of grant preparation. We are an independent grants consultancy and not affiliated, associated nor endorsed by any government agency.

See our case studies of organisations that we have assisted.

If you are ready to get that grant, feel free to get in touch.