What is the Digital Games Tax Offset?

The Digital Games Tax Offset is a 30% tax rebate for video game development.

The aim of the Digital Games Tax Offset is to support business growth and change to the way Australian businesses can claim depreciation of intangible assets like intellectual property and in-house software.

Most of Australia’s games companies are independent studios creating original IP and benefiting from the huge global demand driving a steady pipeline of work on licensed properties, ‘work for hire’ projects and multi-studio collaborations. In 2021, one out of every ten games on Apple’s new Apple Arcade video game platform was made in either Australia or New Zealand. Australian games development studios are perfectly placed to support a 24-hour continuous development cycle. Our time zone means we keep development going while North America and Europe are asleep.

The exact details of the program is yet to be confirmed, so some of the information is indicative only. 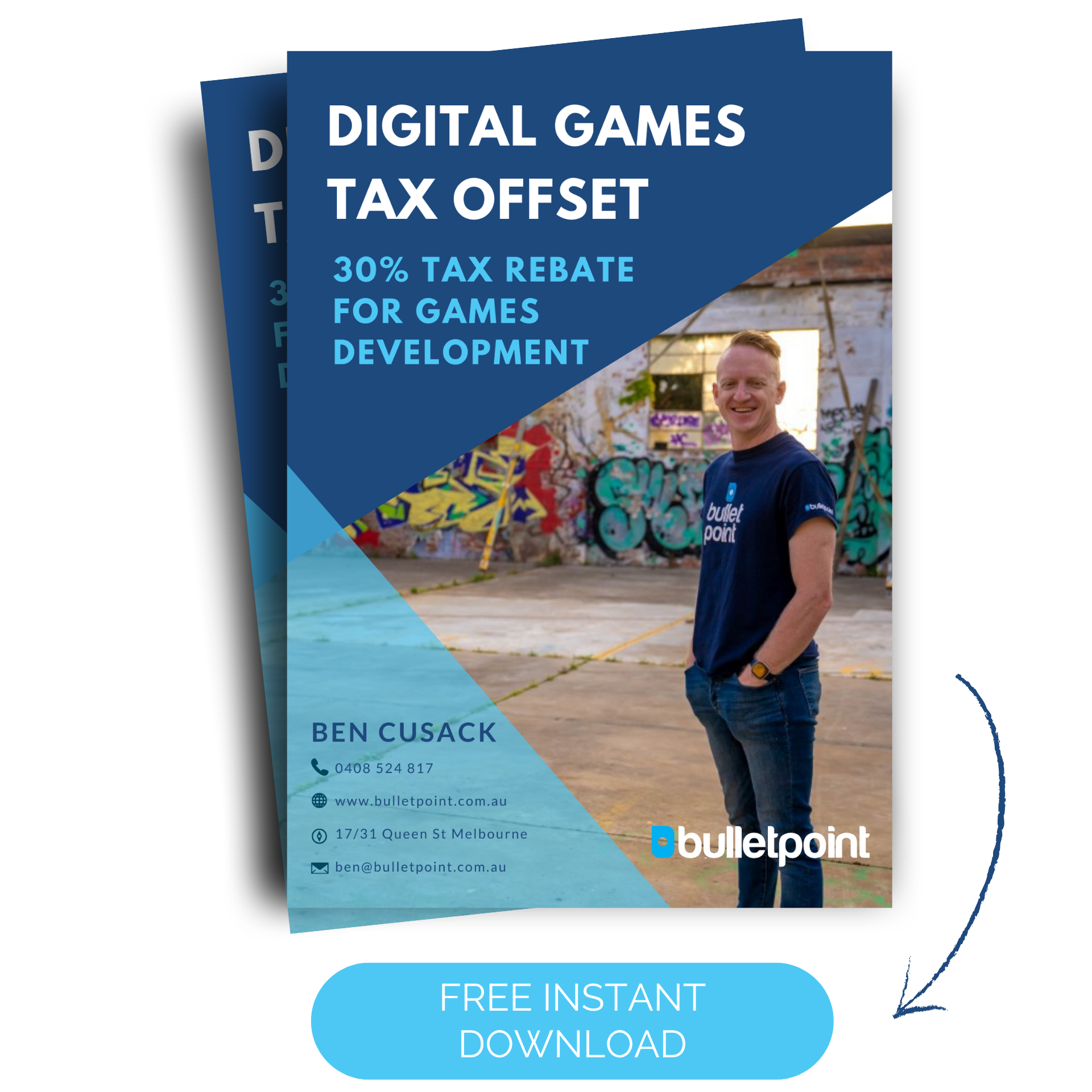 The digital games tax offset is a refundable tax offset of an amount that is 30% of a company’s qualifying Australian development expenditure on:

One of the requirements for entitlement to the digital games tax offset is that the company must be issued with a completion certificate, a porting certificate, or an ongoing development certificate, which state the amount of qualifying Australian
development expenditure on which the offset will be determined.

The offset is claimed by a company in its income tax return.

A company is entitled to the digital games tax offset)for an income year if:

To be eligible for the Digital Games Tax Offset you will need to be:

Games with gambling elements and games that would not be able to achieve classification will be ineligible for the Digital Games Tax Offset.

Eligible games for the Digital Games Tax Offset could include:

Ineligible games for Digital Games Tax Offset could include:

Games development studios will be able to claim per-project for new eligible games, and annually for a slate of further work (‘live ops’) done on existing/released eligible games across the financial year.

The Digital Games Tax Offset will be administered by the Office for the Arts and the Australian Taxation Office (ATO), and will form part of the Income Tax Assessment Act 1997.

What is a game developer?

How to claim the Digital Games Tax Offset

Sledgehammer Games has chosen Australia to set up its only development studio outside its US home. The studio is one of the developers behind the blockbuster Call of Duty franchise. In just over a year since its launch in 2019, the company has grown from six people to over 80—a feat made possible due to the large number of talented developers and creative talent in Australia.
‘Australia is a great place to make video games,’ says Andy Wilson, Sledgehammer Games’ Chief Operating Officer. ‘We are extremely happy with the growth we’ve seen over the last year and are ahead of the targets we set ourselves against several measures. The talent, the support and the general attitude towards new entrants have all exceeded our expectations.’
While it’s early days for Sledgehammer Games, the company is determined to make a contribution to the local games industry. It has reached out to local universities and plans to offer internships and mentoring opportunities over the coming years.
‘The university programs that are geared towards games are extremely strong in Australia and specifically Melbourne,’ says Wilson. ‘Several are world-class and that bodes extremely well for the next generation of developers. This is particularly exciting as it means we can directly help nurture and grow a whole new generation of game developers.’
Sledgehammer Games has also built relationships with industry and government bodies with a view to supporting and championing games development in Australia.
‘We have been really heartened by the support we’ve received since announcing Sledgehammer Games Melbourne, from industry bodies such as the Interactive Games & Entertainment Association and from government, both federal and state in Victoria,’ says Wilson.
‘There seems to be a realisation at all levels that the games industry could be huge in Australia with the right kind of support, so the conversations we’ve been part of have been forward thinking and productive,’ says Wilson. ‘There seems to be a very strong can-do attitude and an appetite for growth, which is very exciting for us as we continue to build our team.
‘We see an extremely bright future for Sledgehammer Games in Australia,’ says Wilson. ‘We will continue to grow our team, while helping to build the industry through initiatives such as our university outreach programs. We intend to build the very best games in existence, and our Melbourne team will have a large role to play in meeting that objective.’
Extradimensional Enterprises
Extradimensional Enterprises is an international games business that is looking to expand its operations from its current base in London. They have been exploring Australia as a possible location, given the talent in existing studios, the available infrastructure and the attractiveness of Melbourne as a place to live and work.
Accessing the Digital Games Tax Offset, Extradimensional Enterprises establishes an office in Australia. The business employs 10 staff in Australia including Leo an Australian programmer who worked overseas in the games industry and takes advantage of the opportunity to return and work at home. Extradimensional Enterprises invests significant capital to develop a new augmented reality game and platform. Local health researchers are able to pick up this platform to further their research on mobility in older Australians.
Mighty Kingdom
Mighty Kingdom has created games for some of the world’s leading toy and entertainment giants, including Disney, LEGO, Australian Red Cross, Sony, Funcom, Rogue, and Snapchat. The South Australian company employs 120 people.  The company successfully listed on the Australian Securities Exchange in 2021 and is one of few Australian-based games companies listed. Mighty Kingdom operates in the global gaming market,which is forecast to reach US$200 billion by 2023. The company also actively supports Adelaide’s games ecosystem, building skills and attracting local and international investors.
House House

Made by House House, an independent studio based in Melbourne, Victoria, Untitled Goose Game was arguably the world’s most talked-about video game in 2020, selling over a million copies in its first three months and winning a suite of major international awards including DICE Game of the Year and BAFTA Award for Best Family Game.

Top made games in Australia

A tax credit for digital games has been proposed in draft legislation that has been made available for public comment. New digital game developers would need to spend at least $500,000 on development. This does not imply that any digital game or extension of an existing one will be eligible.

The draft legislation calls for a digital tax offset to go into effect on July 1 of this year. There is a cap on the offset, so if any company has an offset total that is greater than $20 million, the offset will be capped.

Queensland is taking its investment in the screen industry to the next level targeting the digital games industry and offering big incentives to create even more local jobs.