What is the Tax Incentive for Early Stage Investors?

The program helps startups to get capital by giving investors tax breaks when they get equity in small innovative companies. 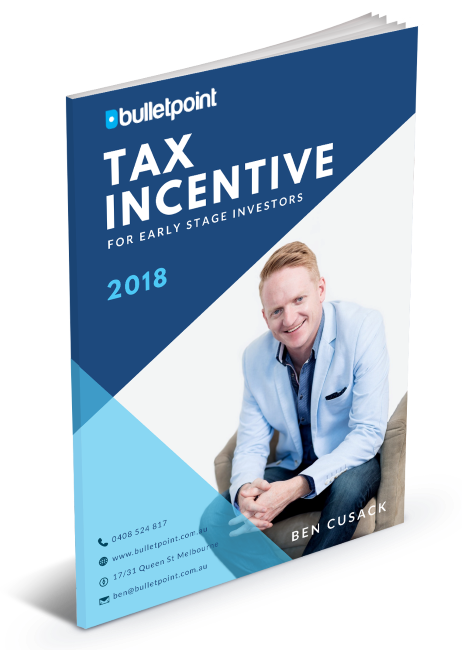 The Tax Incentive for Early Stage Investors, an initiative by the National Innovation and Science Agenda, to promote investment in innovative, high-growth potential startups by providing concessional tax treatment for investors, including:

What is an early stage investor?

An early stage investor must meet either the:

What is a sophisticated investor?

A sophisticated investor has:

Under the Corporations Act 2001, ‘sophisticated investors’ don’t have to be provided with a prospectus or product disclosure statement, when being offered shares in a ESIC.

A sophisticated investor is not restricted as to the amount that they can invest in an ESIC in an income year but the tax offset is capped at a maximum amount of $200,000 for each income year.

What is an early stage innovation company?

A company will qualify as an ESIC if it meets both:

What is an ESIC?

An ESIC or Early Stage Innovation Company, is a start-up that has less than $200,000 in revenue and less than $1 million in expenses. It also has level of innovation and high growth potential.

What is an early stage investment company?

An early stage investment company is the same as an Early Stage Innovation Company or ESIC. It is a start-up that has less than $200,000 in revenue and less than $1 million in expenses. It also has level of innovation and high growth potential.

What is early investor tax offset?

The early investor tax offset is equal to 20% of the total amount paid in return for the qualifying shares upt to $200,000 in an income year. This includes any offsets that are carried forward from prior years’ investments and offsets claimed on indirect investments.

John, a sophisticated investor, pays $4 million for new shares in ESICs during the 2016–17 income year.

Although 20% of the total amount John has paid for the ESIC shares is $800,000, her entitlement to the early stage investor tax offset is capped at $200,000 (provided the other eligibility requirements for the incentives are met).

The modified CGT treatment applies to all of the shares that she purchased.

How do I find investors for my startup?

There are a number of ways to get investors for your start up including. Here are some tips I have put together.

Will investors invest in an idea?

Very rarely. They are generally after a company/people with a track record of some description; whether it be industry knowledge, market opportunity, commercialisation experience, user growth rate or current sales.

To meet the early stage test for the Tax Incentive for Early Stage Investors, the ESIC must meet four requirements:

There are a number of ways to qualify for the 100 Point Innovation Test to get the early stage investor tax offset.

The 100-point test is an objective test and should be self-assessed.

To qualify for 75 points:

To qualify for 50 points:

To qualify for 25 points:

There are five requirements of the principles-based innovation test to get the early stage investor tax offset.

What is Eligible Accelerator Programme?

For an eligible accelerator programme to qualify for theearly stage investor tax offset, it has to:

What is R&D tax incentive?

The R&D tax incentive is a rebate you get for developing new products and services. It allows you to claim back up to 43.5% of the costs related to research and development.

What is seed stage investment?

Seed investment generally refers to an early investment after the company has been bootstrapping for a while. Look to friends, family, angel investors and crowdfunding as potential avenues for seed stage investment.

Companies are required to complete an early stage innovation company report if they issue new shares to one or more investors during a financial year that could lead to an investor being entitled to access the early stage investor tax incentives.

For each ESIC investment that you receive during the year that may give rise to an investor accessing the tax incentives, you should keep the following information to report to us:

What is an ESIC ATO Ruling?

A company can request the ATO make a ruling on whether it qualifies as an ESIC against the principles-based innovation test.

Do you need an ESIC ATO Ruling?

If you dont meet the 100 point test, you don’t need an ATO ruling to establish your ESIC status.

You will need to describe the company innovation information with a 1500 Character limit.

You will also need to include the investor details:

Bulletpoint maintains an ESIC Register if you are looking for high growth start ups to invest in. Contact us to discuss further.