Schemes backing the state’s next growth engines after the local car industry winds up have had mixed progress. 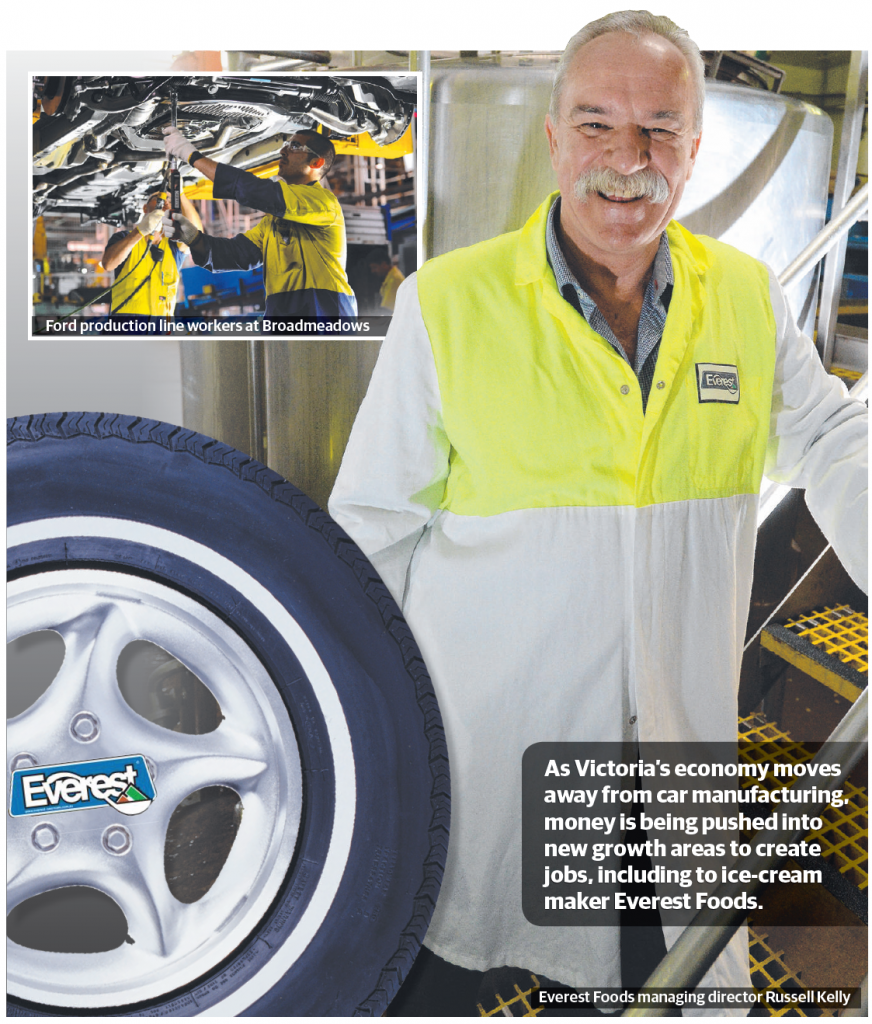 Everest Foods chief Russell Kelly says knowing which battles to pick has been critical to the expansion of the Melbourne ice-cream and gelato maker.

Mr Kelly is not interested in slugging it out against the major ice-cream brands in supermarket aisles and convenience stores. Instead, Everest has been notching up double-digit sales growth of its Nörgen-Vaaz ice cream and Everest gelato ranges by focusing on supplying cafes, restaurants, hotels and hospitals.

“We have really focused hard on the areas not dominated by the multinationals,” Mr Kelly told BusinessDaily. “That has given us a fairly broadbased food business.”

The Victorian Government, too, has a vested interest in ensuring Everest continues to scale new heights. The Reservoir-based business was recently granted $283,000 as part of a government-backed manufacturing support package, unveiled in the wake of the planned exit of the nation’s car makers.

Everest will use the funds to undergo a $1.2 million upgrade of its production line, installing a new blast freezer which will increase output by between 20 to 25 per cent. It will also add five workers to the factory floor, taking the number of full-time employees to 60.“It gets rid of a bottleneck that we had identified in our manufacturing line,” Mr Kelly said of the upgrade. “We’ll be able to get more products out more quickly.”

More than $200 million in industry assistance packages are being rolled out aimed at supporting a new generation of manufacturing jobs in the absence of Ford, Holden and Toyota.

Progress to date has been mixed. Everest obtained its capital injection via the $24.5 million Melbourne’s North Innovation and Investment Fund, launched after Ford announced it would cease making cars locally in 2016.

The fund has allocated $18 million of its cash pile to 13 projects expected to create 570 full-time jobs in Melbourne’s northern suburbs.

Another $24.5 million was allocated to the Geelong Region Innovation and Investment Fund, topped up with a $5 million contribution from Alcoa when it announced the closure of the Point Henry smelter.

Progress on the Geelong fund has been slower with just $8 million allocated to five projects, including a $5 million co-investment pledged to carbon fibre wheel maker Carbon Revolution.

It is hoped that 750 new jobs will be created from the Geelong fund.

“It’s been an encouraging response to date,” he said. “There were number of unsuccessful projects that missed out in the first round. They have resubmitted and we are hopeful they will be successful in round two.”

The largest — a $155 million growth fund — is yet to allocate a single dollar having only finalised its full funding package in late April. It’s a lack of progress which has frustrated many in the manufacturing sector.

“We understand some of the funding was delayed by the Budget,” an industry figure, who asked not be named, told BusinessDaily. “It’s been more than six months since it was announced. There is certainly a desire to see this thing rolled out.”

Ben Cusack, from government grant consultancy Bulletpoint, has worked with a number of businesses applying for grants under the Geelong fund. Mr Cusack said simply having a great idea was not enough to get a grant.

Any application, he said, needed to be both “shovel” and “business” ready. Expansion plans should be detailed and include new factory drawings, planning permits and quotes.

The proposal should also be backed by a fully-formed business plan detailing the Government’s expected return on investment in the form of additional revenue and jobs.

“The more you can tell the Government how good you are and what your business does, the easier it will be for them to score your grant application more highly,” Mr Cusack said.

When it comes to securing taxpayer money, it’s also important to bear in mind that not all businesses are equal.

A company that manufactures a unique product is far more likely to attract funding than one that distributes a foreign product. Grants are also most likely to be directed at companies that are exporting and not competing with local firms for market share. “The government does not want to be seen to be supporting one company at the detriment of another,” Mr Cusack said. The biggest carrot any business can dangle in front of a grants committee is the promise of job creation. On this front applicants need more than just a number.

“You will need to prepare a detailed staff schedule for the next five years,” Mr Cusack said.